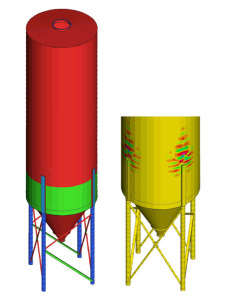 Ultimate Capacity or Limit State analysis (ULS) is an another important form of analysis, especially for tall and slender structures, particularly those manufactured from long sections, such as beams, columns, or thin shells. Stability and buckling analysis are important aspects of Ultimate Capacity Analysis and historically many structures have suffered from such collapse failures, often catastrophic, 2nd only to fatigue failures.

In the majority of occasions, critical loads tend to coincide with maximum loads, e.g. max imposed loads or shock/impact loads or peak machinery accelerations or shock load accelerations, etc.. It is such maximum or critical loads that are used in ultimate capacity analysis in order to determine whether a structure is fit-for-purpose and/or within structural code guidelines. Also depending on the nature of the failure mechanisms being modelled, non-linear techniques and post-buckle stiffening effects can also be determined too.

It is often necessary to verify the actual peak loads, which can be readily undertaken by Aecentus with our Data Acquisition and measurement software and hardware. We have a wide range of experience in ultimate capacity / instability / buckling analysis across a wide range of industrial sectors 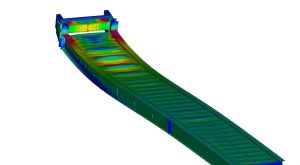 ULS Capacity: Prestressed concrete beds (moulds), 100+ metres in length and subjected to axial compression loads often in excess of 400+ tonnes. Such structures must be allowed to contract freely under such high loads, are often subjected to uncoupled vibration as well as concrete shrinkage loads, thus making them particularly volatile and complex structures, with high risk of instability and catastrophic failures.